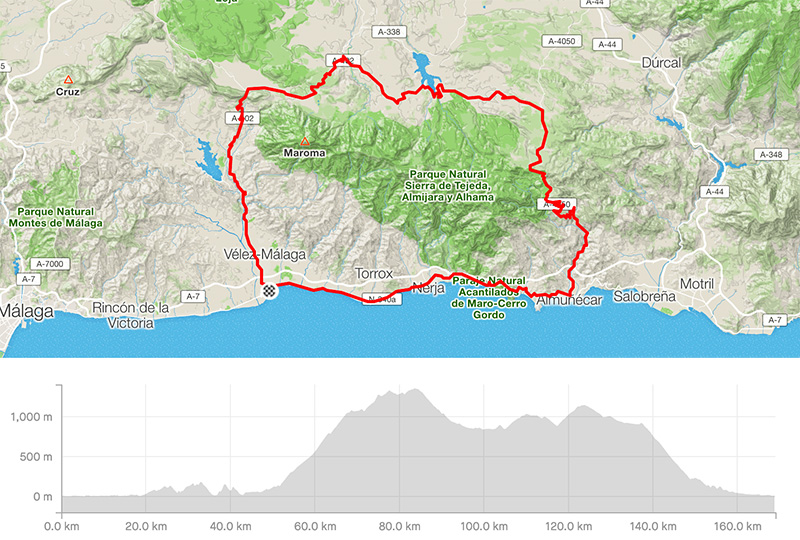 The east part of Costa del Sol has many nice hills and climbs too, just maybe it is less crowded.

From Torre del Mar practically to Almuñecar, there is only the N-340 which is a coastal road, passing Nerja it is like a scenic route. In Almuñecar at the beginning, turn left to take the back road A-4050 to go over Jete and Otivar to the top of the famous pass Cabra. Some 25km and later on a bit of undulated terrain to reach the crossroad with the GR-3302 on altitude 1300 m.a.s.l. +. Turn left for Jayena.

There are no more climbs just a few short hills. Firstly, it is a long descent to Jayena and still down to Fornes. Keep on the same road going over the village and along the lake to the next one called Arenas del Rey. There are some fountains to get fresh water if needed. Then still on the same GR-3302 go up to the crossroad and turn right in the direction of Alhama de Granada.

Staying on the A-4150 you come to a nicely located hamlet Los Ventorros, next to a small lake where even refreshment is available. Keep on for more km to meet the crossroad with the A-402. Turn left, ride up and then down to micro-plateau around the city Zafarraya. At the end, there is a hole called Boquete de Zafarraya.

The last section, still on the A-402 which is a long downhill to Viñuela. At the beginning, turn left to ride on the back road A-7205, which is parallel to the main road. When you enter Velez-Malaga you have 2 choices, to take a main road to Torre del Mar or ride through the city.