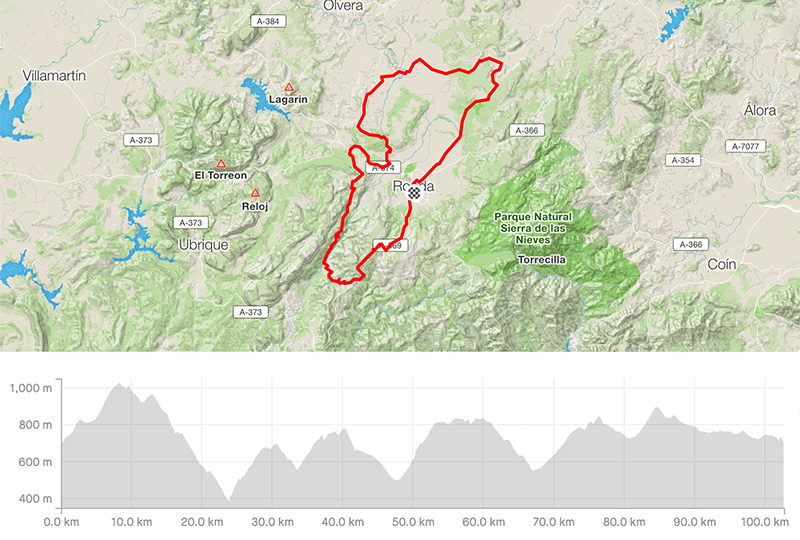 Vuelta 2014 Stage Ronda – one of the most amazing round routes around Ronda with adequate kms and nice gained elevation.

You start in the city center taking the direction of Gaucin / Jimena de la Frontera through the A-369. Shortly you will start climbing to the pass Puerto Encinas Borrachas over 1.000 m.a.s.l., then you should keep on for Atajate still surrounded by dry and steep mountains. After 20km you arrive in Atajate and turn right for Benaojan / Jimena de Libar to get nice 6km long downhill via the road MA-8307.

In the valley, turn right for Benaojan / Montejaque through the MA-8401. You will go along a famous paleolithic cave Cueva de las Piletas showing some old pictures of early life here. Entering Benaojan you will come to the T-junction – turn left for Montejaque, still up and in the village, turn right to follow the road MA-8402, later MA-8403 going along the lake Montejaque. After 6km you will get to the main road Ronda – Algodonales, the A-374. Turn back to Ronda for a few kms. Then turn left to follow the signs for the roman archaeological site Acinipo to see the impressive rest of the main theatre wall.

Then keep on for Setenil de las Bodegas famous for its hanged houses in the rock formation. The road A-7402 is a bit damaged. From Setenil de las Bodegas you have to climb back to the Malaga Province through the CA-414/MA-414. Following a road to Cuevas de Becerro you will go downhill and reach a village; turn right back to Ronda. There is one last pass called Puerto del Saltillo (830 m.a.s.l.) and you will see Ronda again.